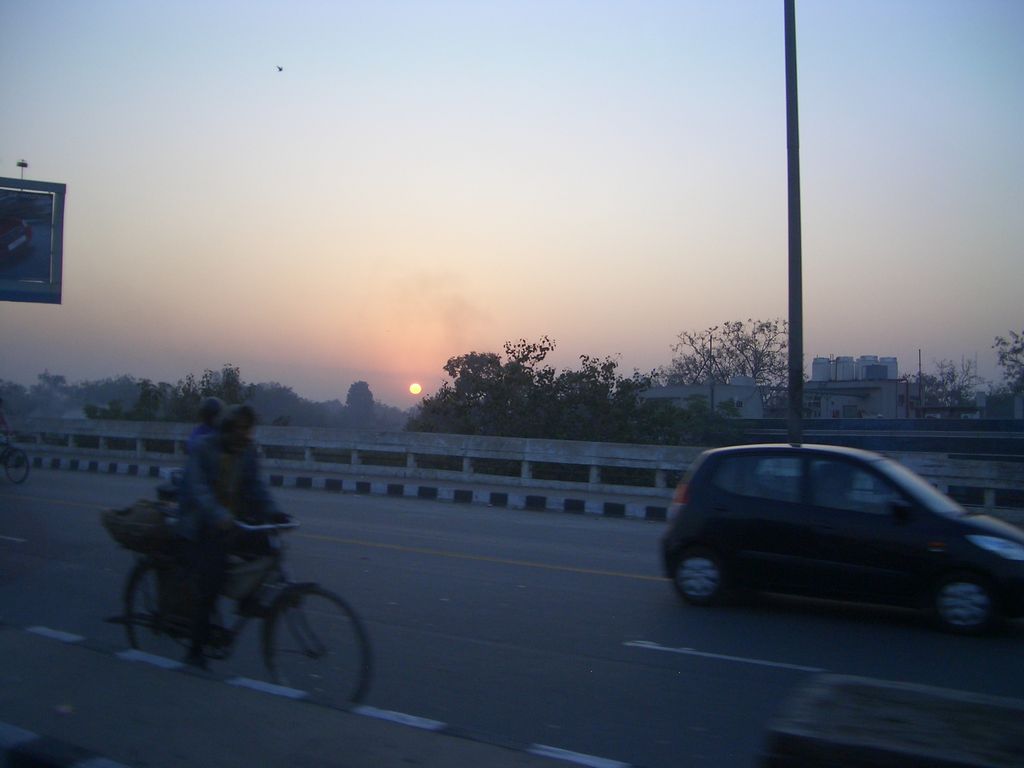 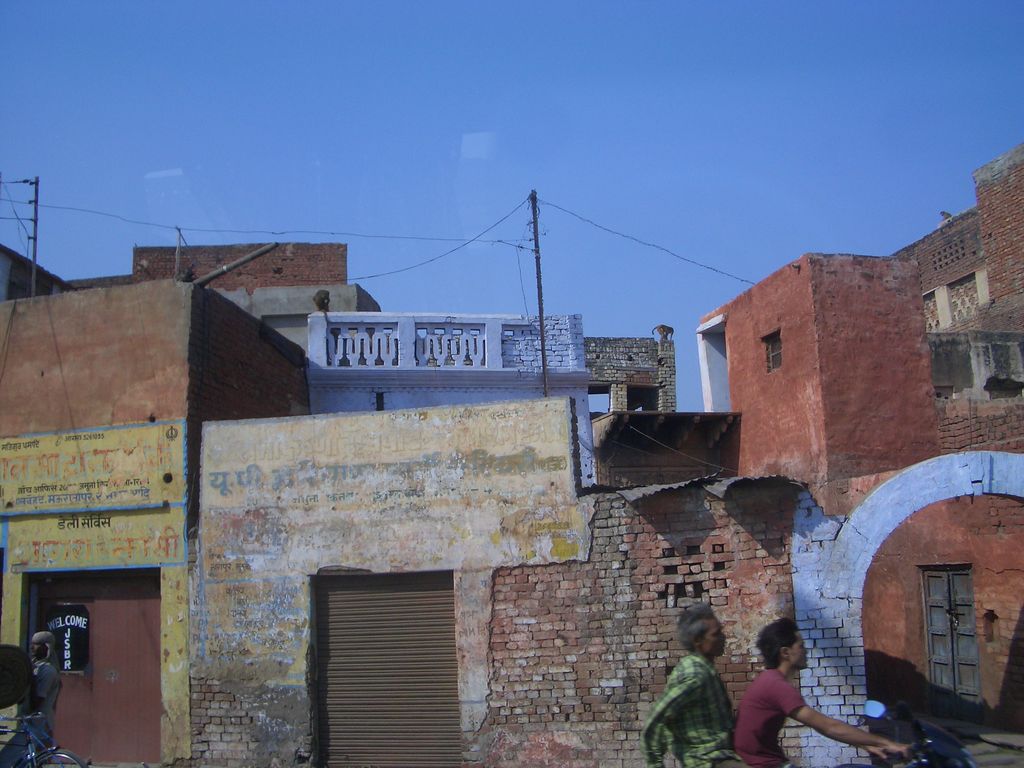 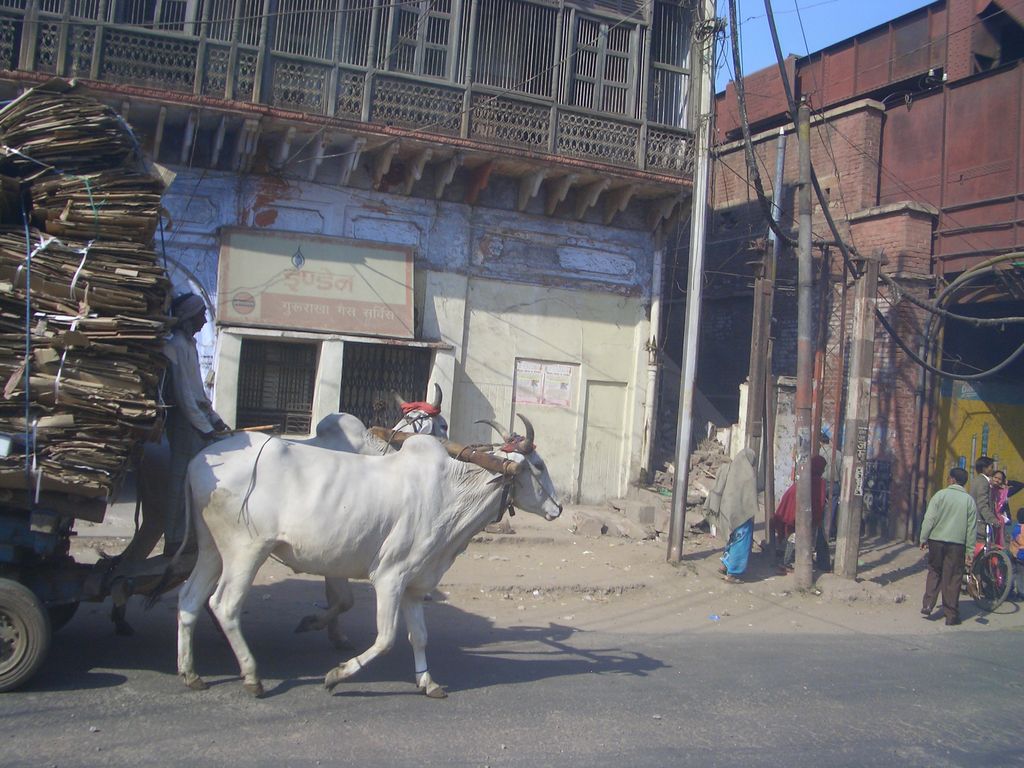 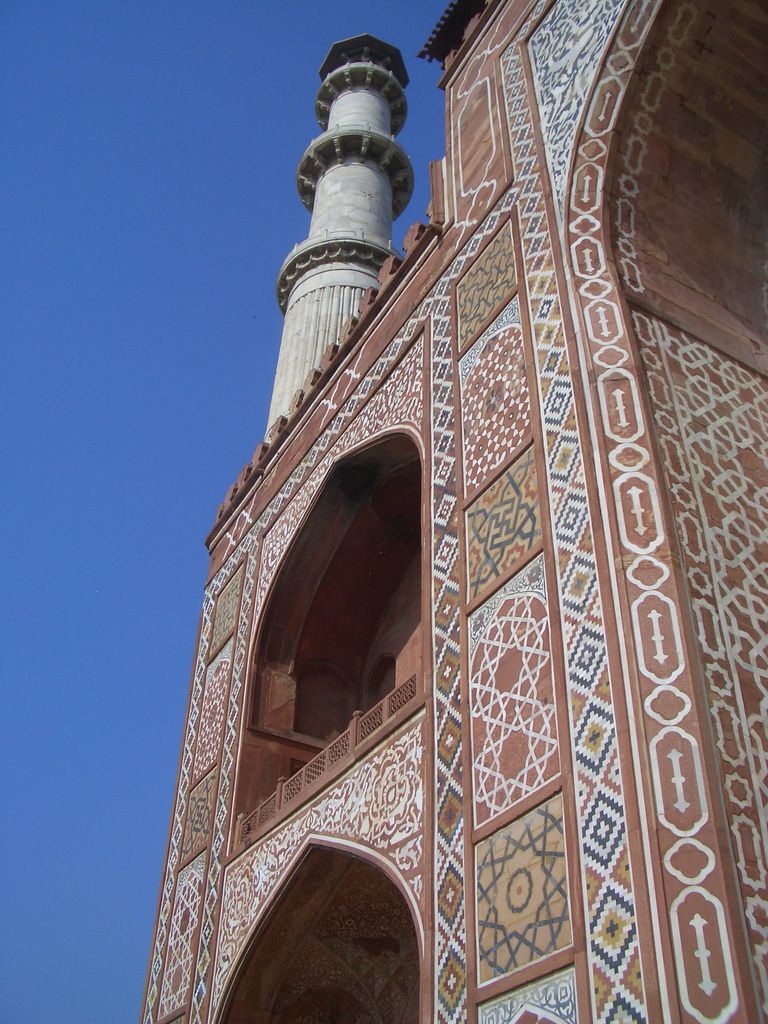 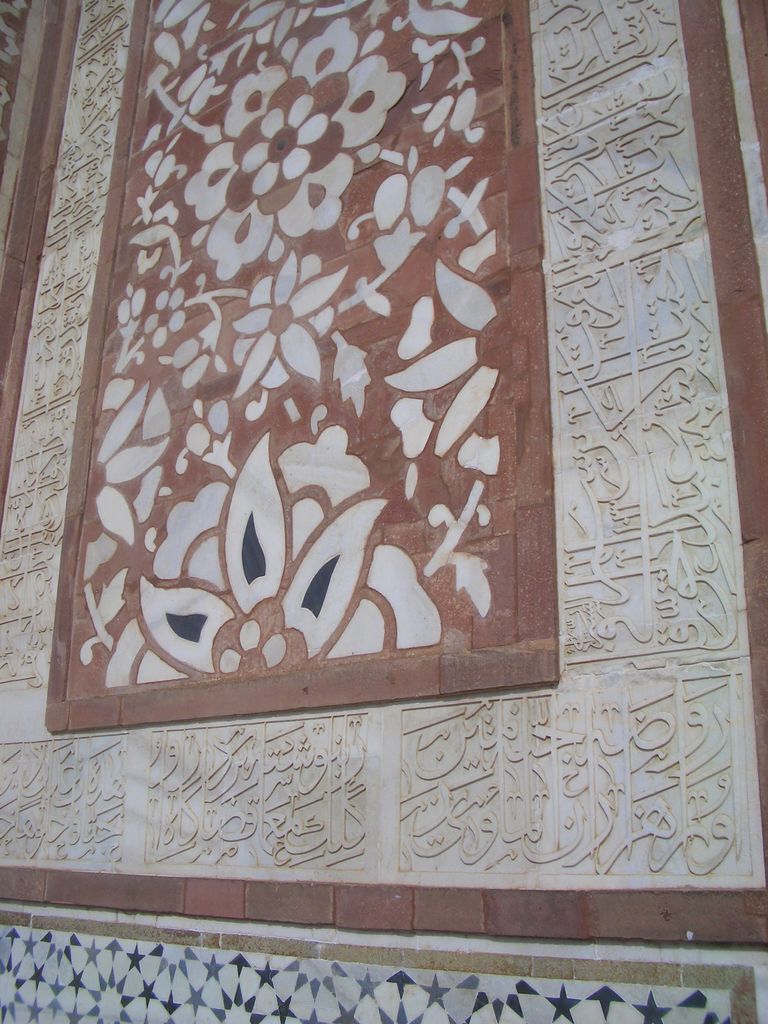 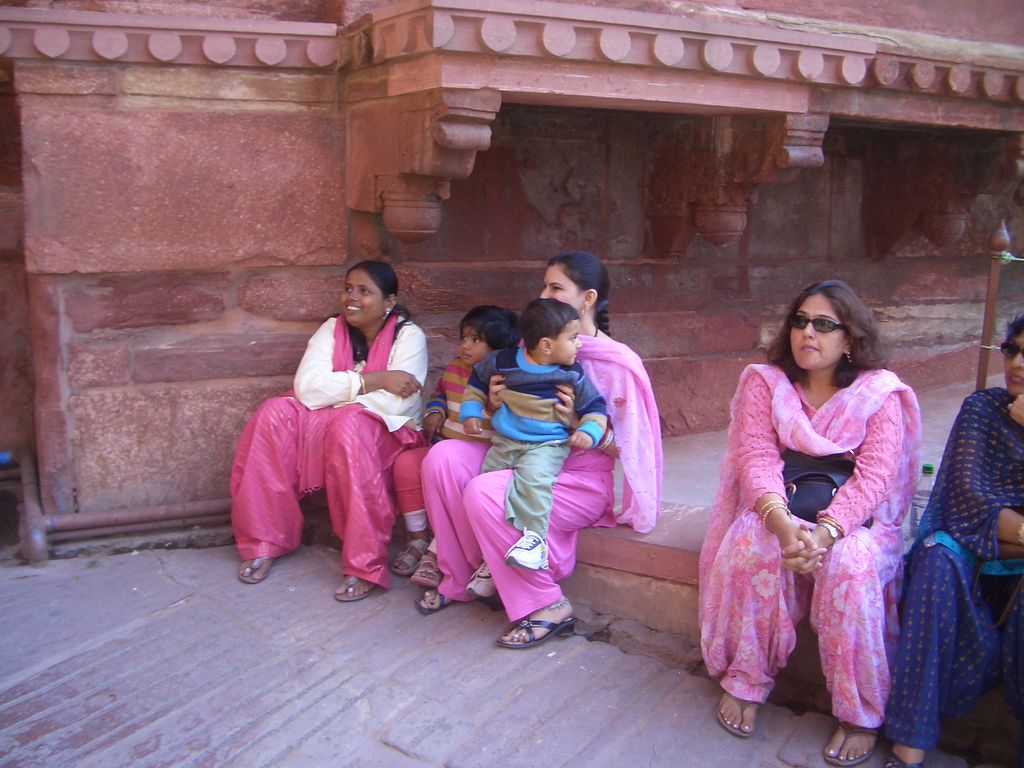 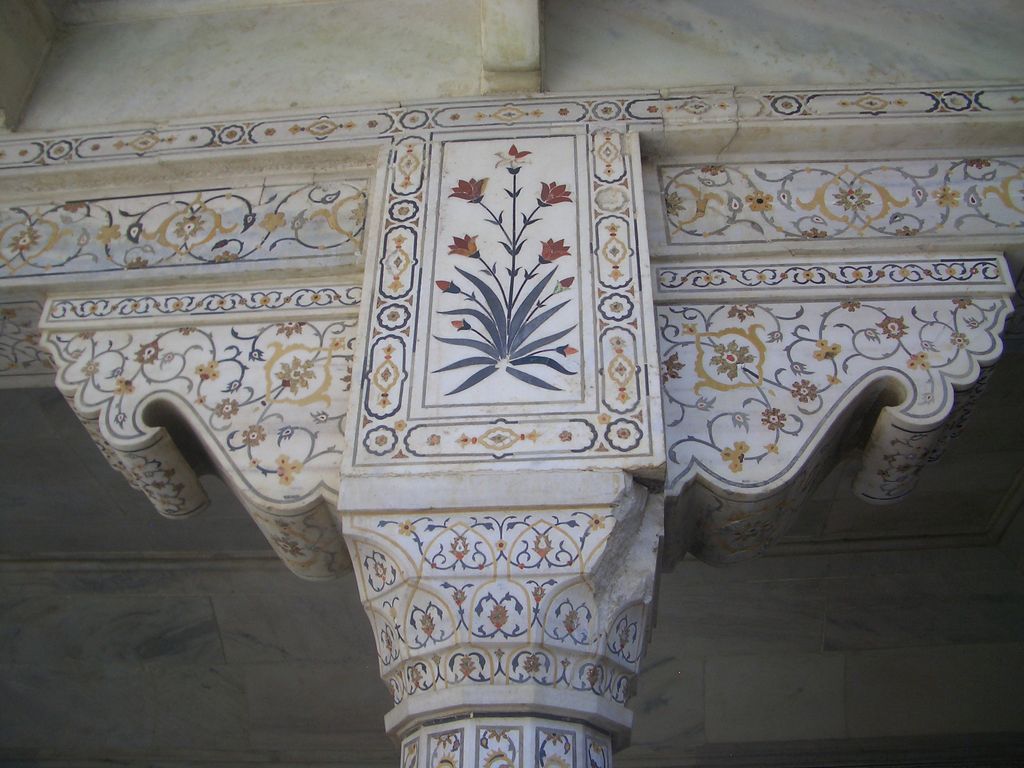 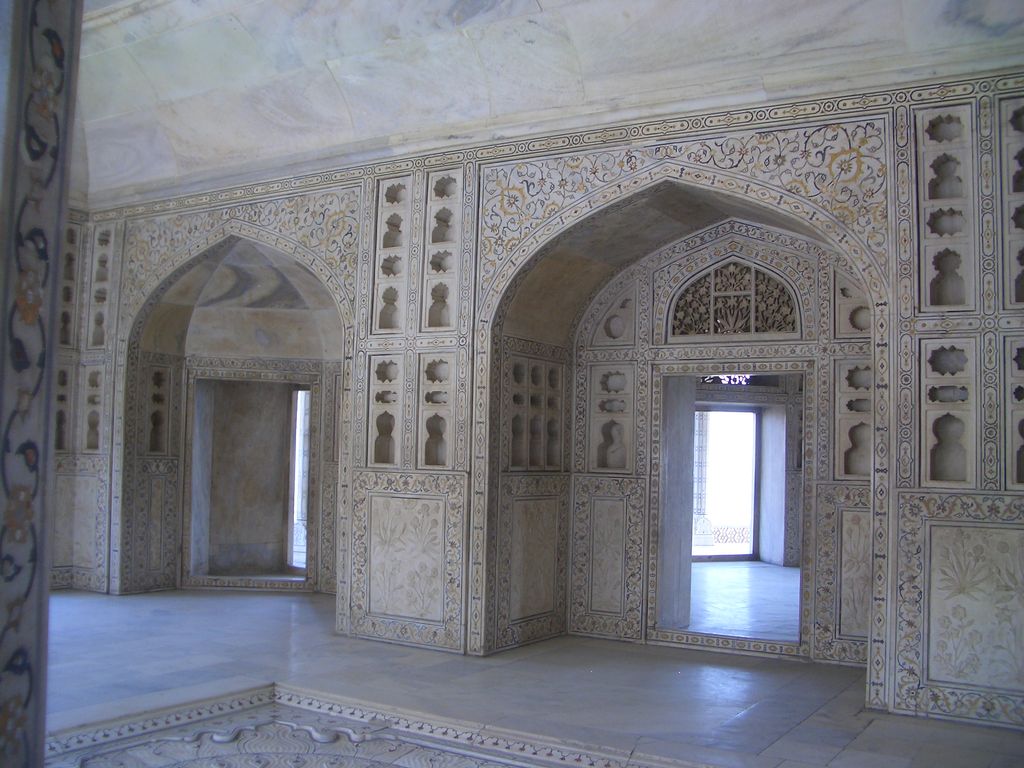 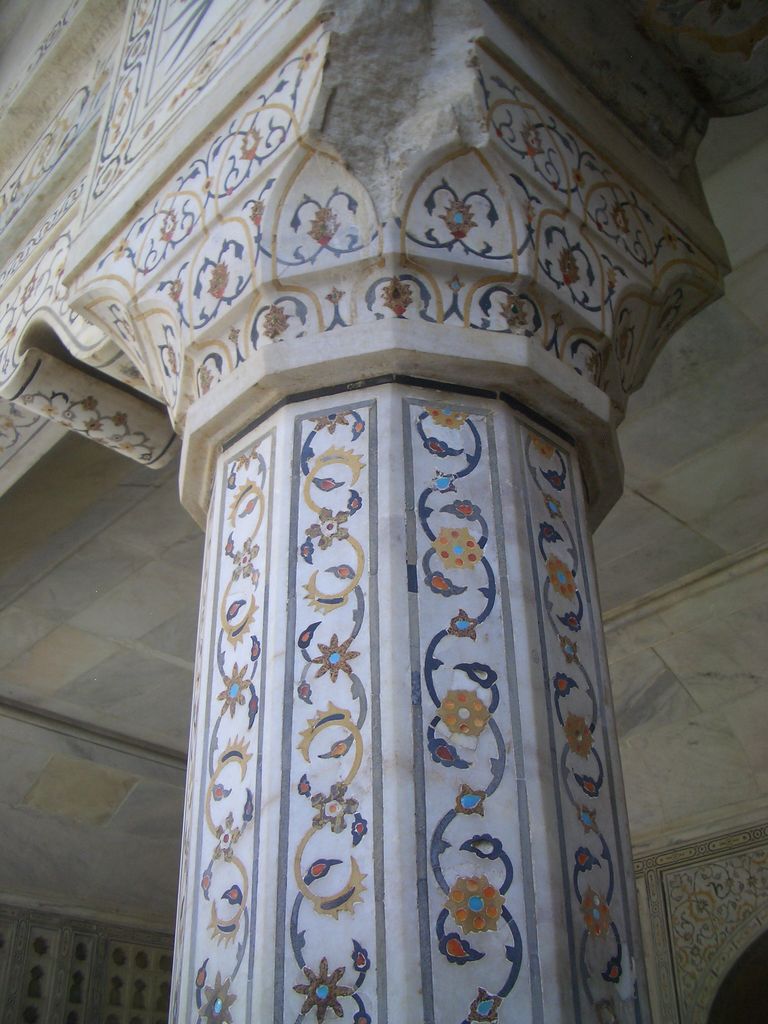 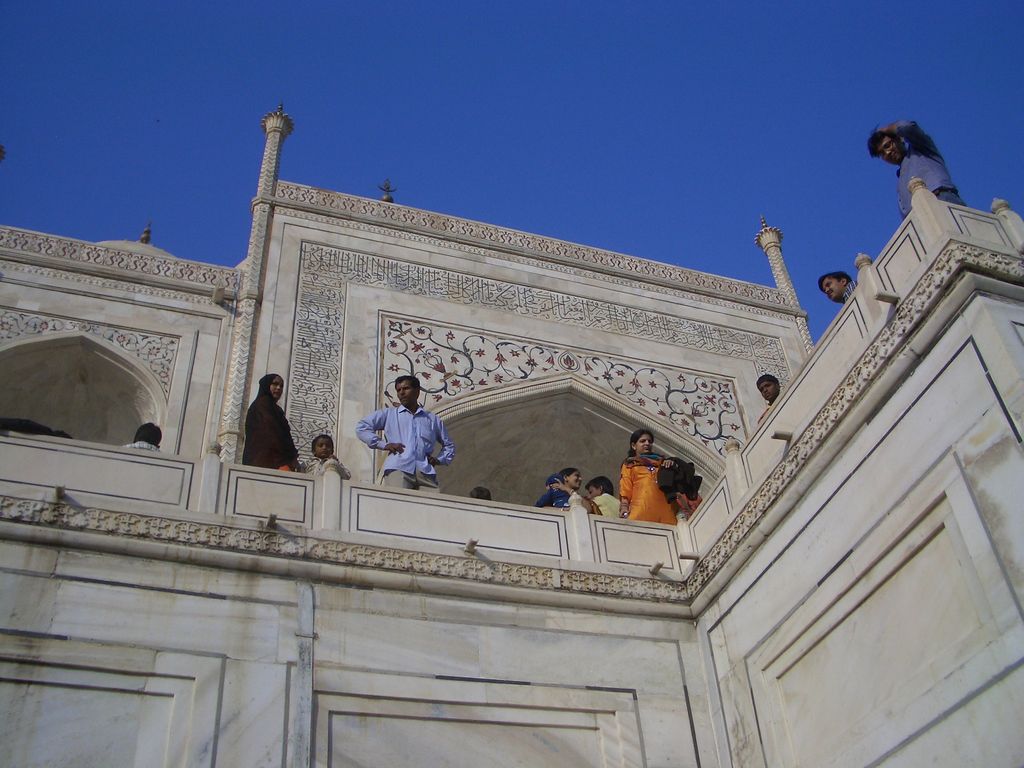 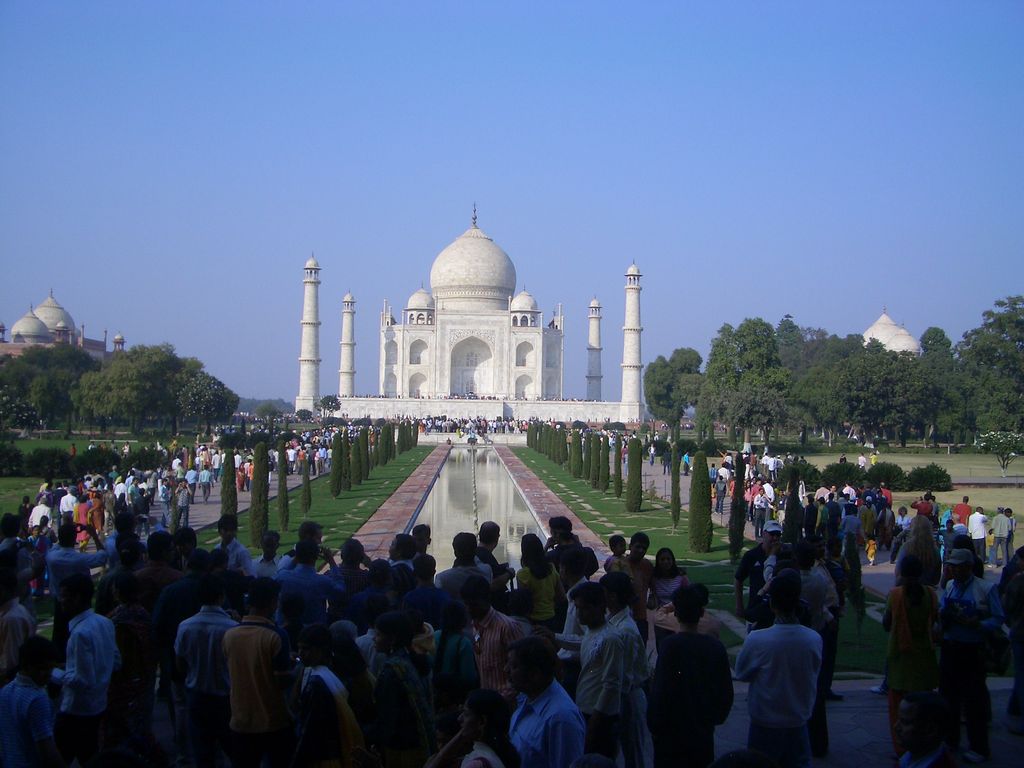 The Taj Mahal - A Testament to Love

It's rare when I have a long enough layover to sightsee, but this trip gave me four days in Delhi, India.  The cooler temperatures and dry weather made perfect conditions for visiting the Taj Mahal, and I booked a tour through the hotel. 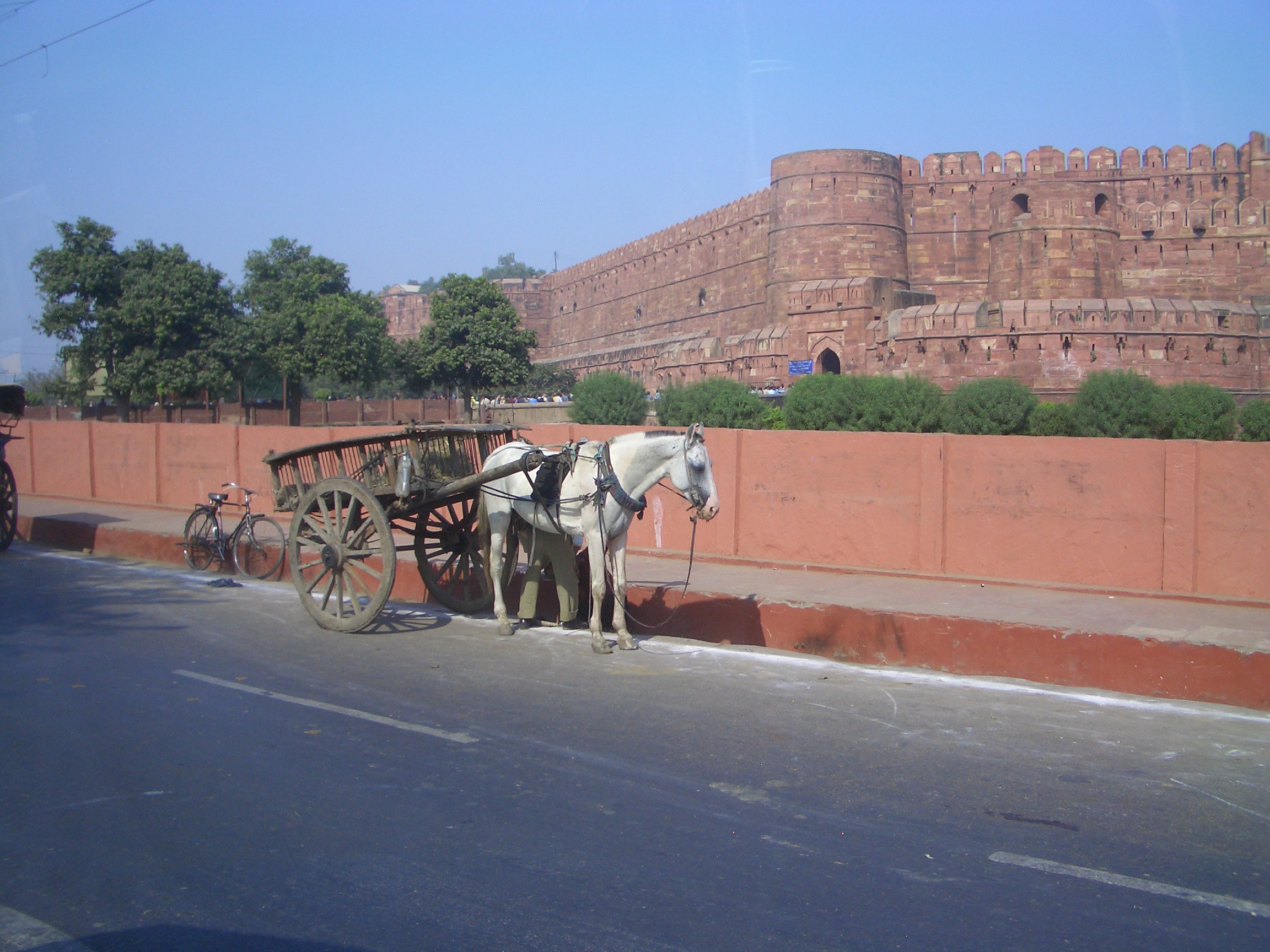 I had been to India many times, but never before experienced it like this.  What feels chaotic and mystifying to a Westerner, is harmonious to Indians.  If there is one word that best describes this country, it is coexistence, for here, everything seems to blend despite all the complexities.  People are free to worship any god, and there is a blending of cultural and religious traditions, that can be seen in all aspects of life.  Horses, cattle, water buffalo, peacocks, parrots, dogs, monkeys, donkeys, and camels, all wander freely along the four lane road that's packed with animal-drawn carts, motorcycles, cars, trucks, busses, motorized rickshaws, bicycles, and pedestrians.  Painted lines mean nothing, and accidents are commonplace.  We passed two within three minutes of each other. Our van comfortably held the seven of us - one German, two Czechs, one from France, a Brit, a Columbian, and myself, and all of us spoke English.  Stops at Emperor Akbar's mausoleum and Agra Fort preceded the highlight of our tour, the Taj Mahal.  Space considerations force me to omit them from this article, but those stops were well worth it.  Traveling with such a wonderful group made this trip memorable.

What is immediately apparent is that the concept of space varies between cultures.  Westerners are used to having a huge amount of personal space, but in India, there is nothing like this.  Pushing and shoving is the norm, and I literally received a back massage while standing in line at the Taj Mahal's east entrance.  Security is handled by Army personnel, most carrying big sticks as opposed to firearms.  Army issue rifles are usually bolt action carbines, although I saw a few ancient semi-automatics, too.  Since cattle are free to roam wherever they choose, they don't require tickets.

Emperor Shah Jahan built the Taj Mahal for his wife, Mumtaz Mahal, who died while giving birth to their thirteenth child.  It is thought that the completion of the monument took twenty two years, with the main mausoleum completed in 1648.  Constructed solely of white marble, it is considered the finest example of Mughal architecture, combining elements of Persian, Turkish, Indian and Islamic architecture.  Shah Jahan, himself, dictated the use of white marble, with the incredibly delicate inlay of semi-precious stones.  Workers used pencil-sized hand tools to etch the inlays, and those traditions and techniques have been passed from father to son for centuries. 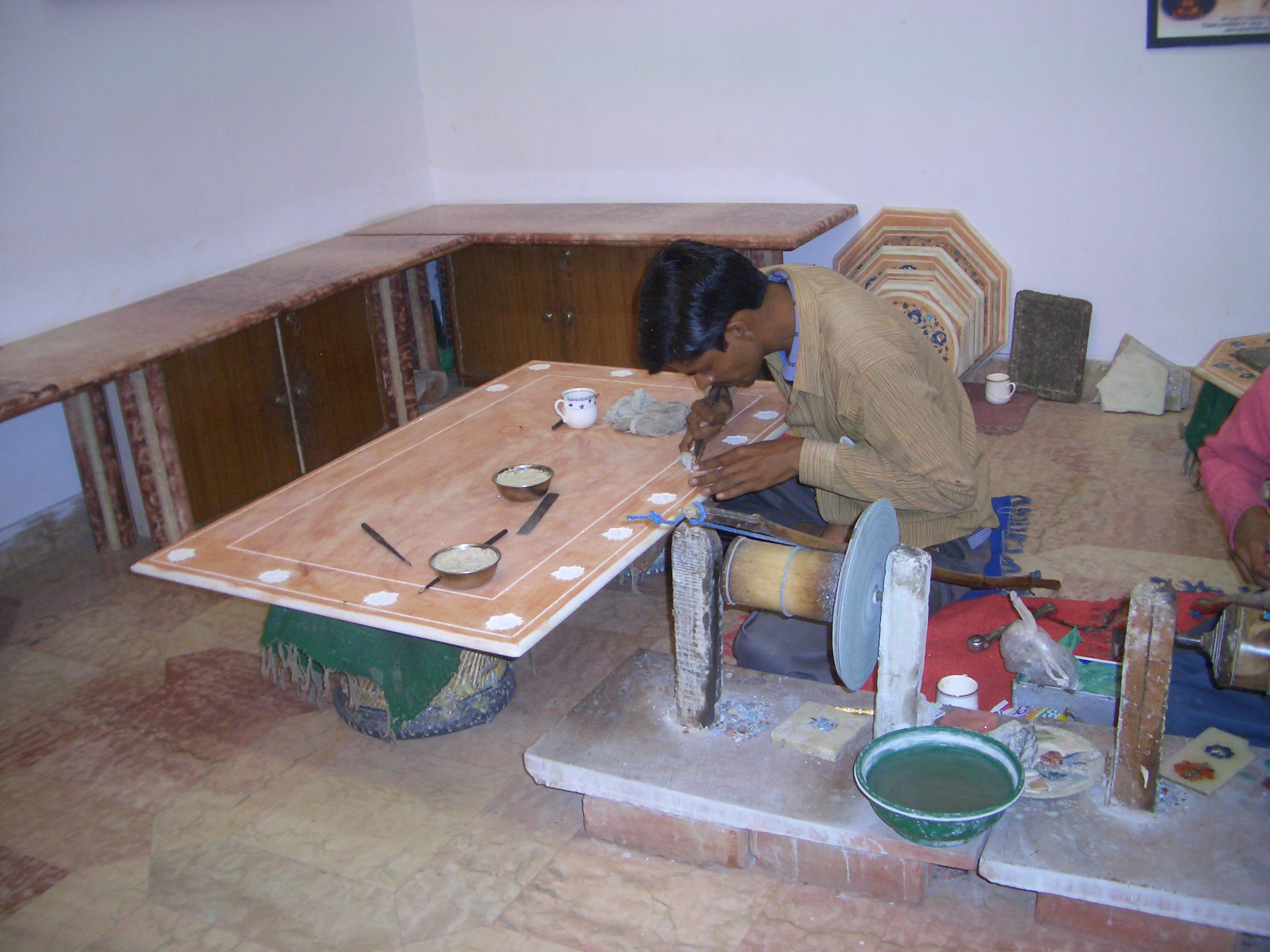 Since there is only one entry to the Taj Mahal's mezzanine, thousands of people were pushing to get in.  I soon found myself caught in a human wave, and had to push as hard as I could against the crowd to shelter three children who were being crushed against me.  With this experience, I bagan to understand why so many pilgrims have been trampled in Mecca.  It is a living, breathing push of humanity - like a tide coming to shore.  I can't imagine sttempting this feat during the summer heat or the monsoon season. 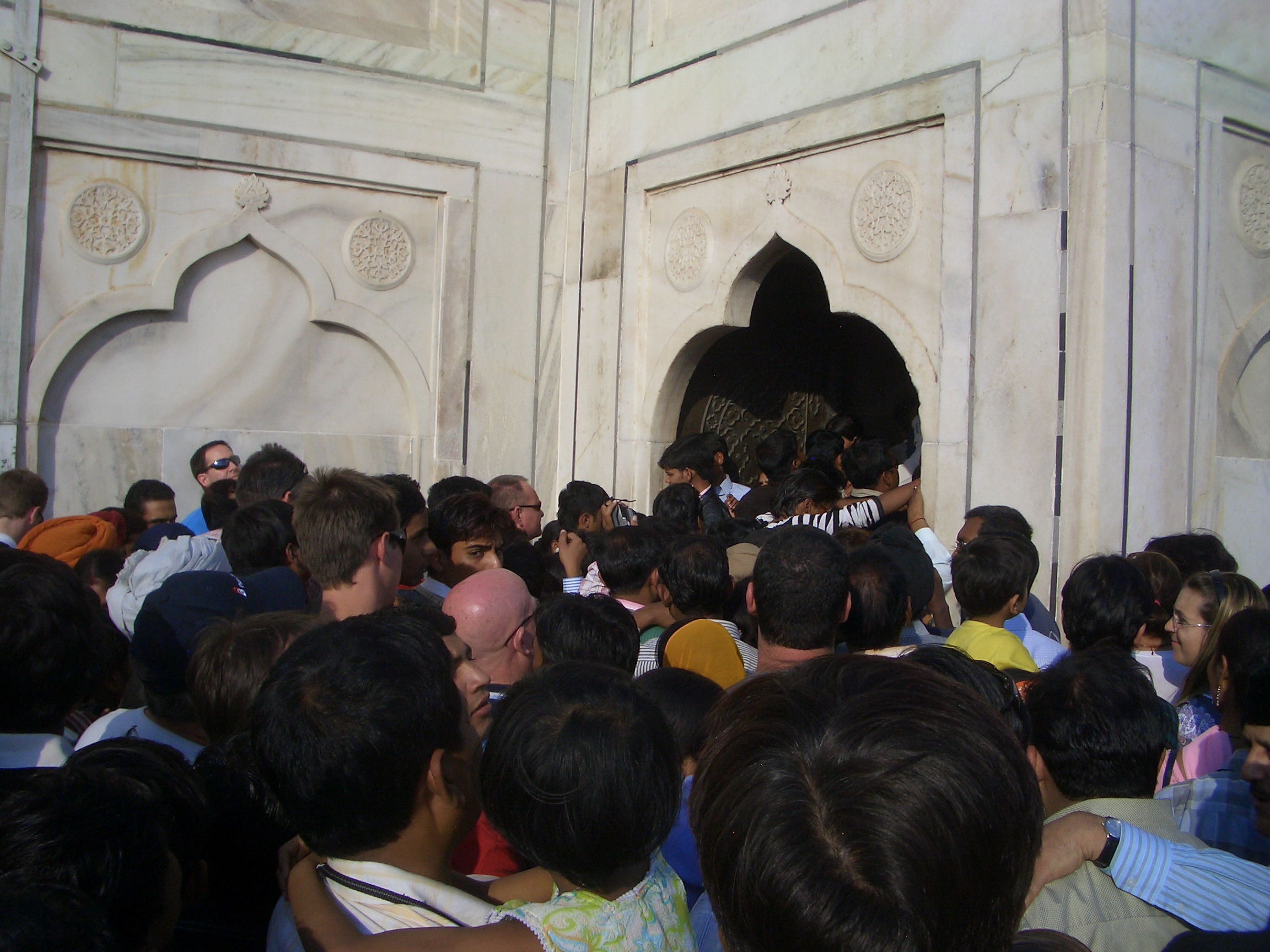 With a similar crowd waiting to enter the Taj and a schedule to keep with the tour, I wasn't able to enter the building, but that didn't dampen my enthusiasm.  I moved to inspect the exterior, which is perfect from every angle.  The exterior decorations are considered to be among the finest in Mughal architecture.  Under certain conditions, the tomb appears to be floating, an intentional illusion created by the monument's primary architect, Ustad Ahmad Lahauri.  The four minarets that frame the Taj were designed as working minarets, a traditional element of mosques.  More than forty meters tall, the symmetrical minarets carry a two degree outward slope.  Should they fall, they will fall away from the main tomb. People-watching was fascinating.  Many women were swirled in beautiful, embellished silks that contrasted brilliantly against the white marble.  Here, families gathered to enjoy the day and captured family portraits against one of the world's greatest monuments.  Large school groups were well-mannered and happy.  This truly is a place of joy and harmony. 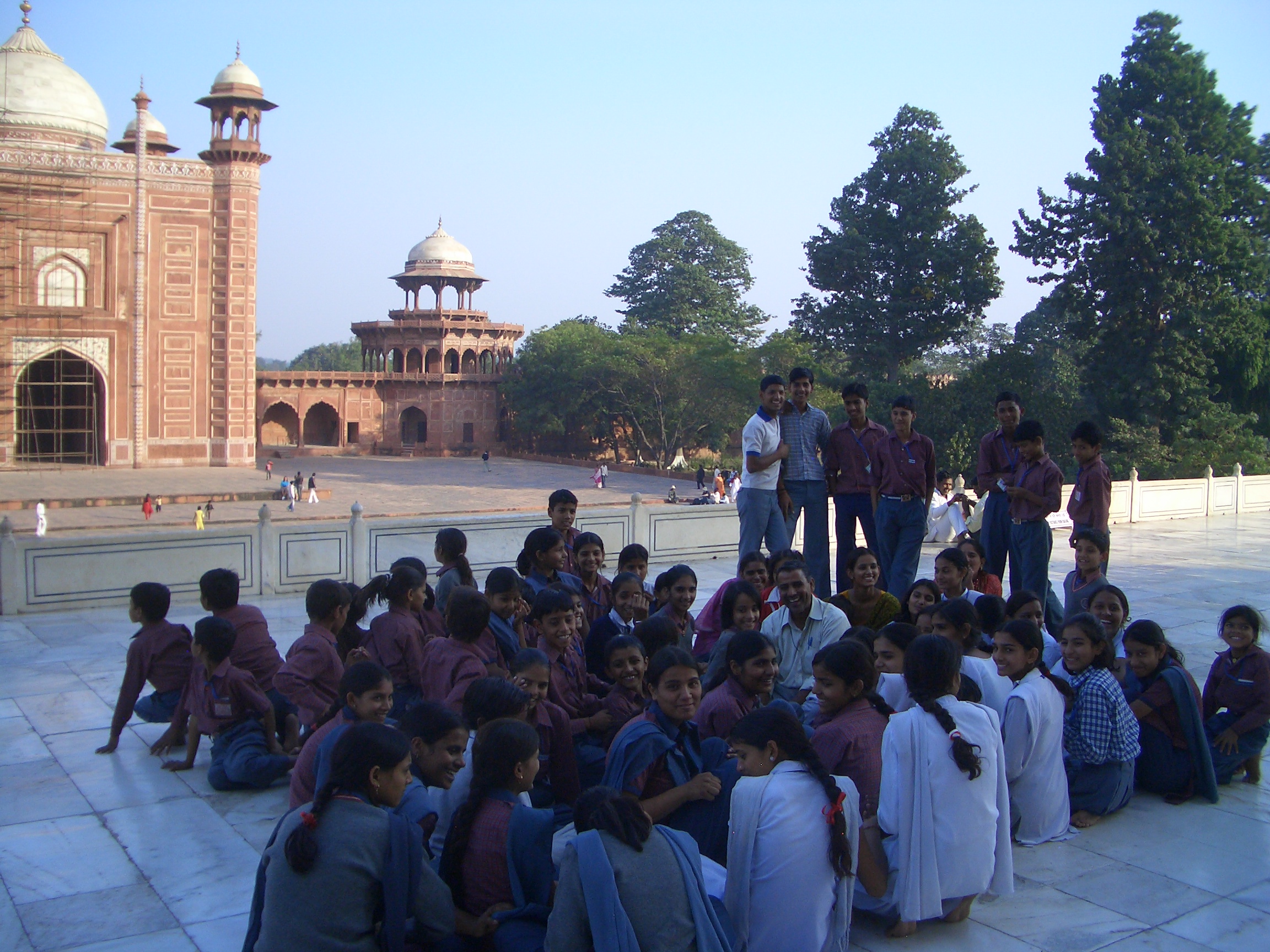 Besides the crowded conditions, the only drawback was the air quality.  People burn whatever they can find, so while their vehicles say they run on "clean burning fuel," it hardly matters.  Near Delhi, the smokey air was suffocating, even inside the van.  Travelers with asthma should be warned to travel with their inhalers.  From my vantage as a pilot, this pollution makes it very difficult to see the runway, especially during daylight.  With the population reaching over a billion, and the lax environmental regulations, it is likely the air will get worse.

I was extremely fortunate to have such beautiful conditions for my trip.  The Taj Mahal is not only an enduring monument to the beauty and intricacy of Mughal architecture, but it is a testament to love. Copyright © 2011 Mark W. Danielson. All Rights Reserved.
All photographs and articles are the exclusive property of the author unless otherwise stated.  No portion may be reproduced without the consent of the author.